The knots that scouts are expected to know vary from time to time as well as from country to country, and even from troop to troop. Many knots must, of course, be the same as those taught elsewhere, e.g., for climbing or boating.  They will be covered on this page but not at the top. The knots listed first will be those taught primarily to scouts and rarely taught elsewhere. These knots are used for “Pioneering” – knots used to tie rope/cord around spars/poles to fabricate frames and trestles.

The first two are essential when creating the Lashings which follow next. Dragging poles into places requires the Timber Hitch and securing the lashings requires a Clove Hitch. The remaining knots are useful generally and found in many other places. 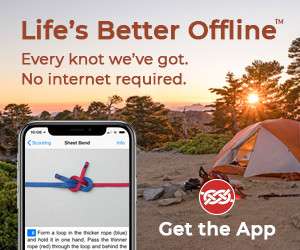 The Clove Hitch is used to start tying a Lashing but should never be used for critical loads: it can slip and, paradoxically, may also jam. However, it is valuable to attach a fender to a boat’s rail or a rope to a theater scenery pole so that the height can be adjusted. When the height is correct, a couple of Half Hitches can be added for security. Later, these Half Hitches are readily released just like the Clove Hitch itself.
LEARN THE KNOT > The Sheer Lashing Shear legs support weight. A single pair can be controlled with a rope as they lean over a stream to lift a bucket.  A series of them can support an aerial walkway. The turns surrounding the lashing at right angles exert a tightening effect on the Shear Lashing Knot. These turns are known as Frapping Turns.
LEARN THE KNOT > A Square Lashing can be used to make a rectangular frame. Many applications have been described including making: support frames; a table on poles lashed horizontally either side of a tree; a fence with poles in the ground joined with bars attached using Square Lashings; and a raft created by lashing bamboo poles across each other.
LEARN THE KNOT > A Diagonal Lashing is used to join two diagonal poles that are being used to brace a rectangular frame. The location of one diagonal in front and one behind explains the gap between the poles commonly found in the center. This lashing may made on poles that happen to be at right angles but when the angle between the poles is closer to 45 degrees, the diagonal lashing is more appropriate.
LEARN THE KNOT >

The scouting knots above are the ones we consider essential, but the following knots may prove very useful in certain situations. A Bowline creates a loop in the end of a rope. Unloaded, it may shake or float undone, but under load it is secure. It is very widely used in boating, climbing, scouting, search and rescue, towing, farming and around the home. Whenever a temporary loop is needed in the end of a rope, a Bowline is the first knot to consider. Permanent loops in rope are created using an Eye Splice or a Brummel Splice. Loop knots used in Fishing are permanent because they are not intended to be released. The one major disadvantage to a Bowline is that tying and untying it under a load are both impossible. See the Midshipman’s Hitch below.
LEARN THE KNOT > A Round Turn and Two Half Hitches provides the only safe way to secure a heavily loaded line to a dock post, bollard, tree, or pile. If the rope is wrapped two or more times around a pile, one person can control immense loads with one hand; when the load is under control, two or more half hitches can be easily added with the other hand. The “Round Turn” is really a “Turn and a Half” but it serves the critical function of ” taking the load” both when securing the line and when releasing it. In a gale, we watched a poorly trained dock hand repeatedly fail to secure our dock line using a Clove Hitch; the experience served to emphasize the value of knowing the Round Turn and Two Half Hitches.
LEARN THE KNOT > A Cleat Hitch is used to secure a line to a dock or a Halyard or Sheet to a cleat. The line is directed first around the further horn and then, continuing in the same direction, around the second horn before starting figure of eight turns. When used for towing or securing a line to a dock, there are powerful reasons to add more figure eight turns and avoid the use of a locking turn. This permits sudden release in an emergency; in addition, massive strain can tighten all the turns and bind them together. By contrast, a Halyard Cleat Hitch can be safely completed with a locking turn: sudden extra strain is improbable and the locking turn minimizes the risk of the tail end shaking loose in a wind.
LEARN THE KNOT > A Midshipman’s Hitch provides an excellent alternative to the Bowline. It can be tied and untied when there is a moderate load on it. The loop is formed by tying the Bitter End to the Standing End using a Rolling Hitch: learn one of these knots and you have learned both. Ashley promotes it as the only knot worth considering if when sailing alone you have, with great presence of mind, left a rope trailing behind the boat. If you then fall overboard and, with even greater presence of mind, catch this trailing rope: hang on with one hand, wrap the end around you and tie a Rolling Hitch to the standing end with the other hand.
LEARN THE KNOT > The Square Knot (or Reef Knot) must never be trusted for any critical load, for example yourself: a Square Knot too readily tumbles over to form adjacent half hitches and then just slides undone. However, when reefing a sail or securing a sail cover, a Square Knot is invaluable and is often completed as a slipped Square Knot or a bow. Tying the first part of the Square Knot with an additional turn forms the more reliable Surgeon’s Knot and using the additional turn for both parts makes a really reliable Shoelace Bow (Surgeon’s). Unfortunately, tying both Half Knots in the same direction creates the dreaded, and almost useless, Granny Knot.
LEARN THE KNOT >