Family, Nickname, Websites and an App British sailors in the 1700s gave the nickname “Grog” or “Old Grog” to Admiral Edward Vernon because his coat was made of a coarse silk called Grogram (a contraction of Grosgrain). When he introduced the practice of diluting the sailors’ daily rum ration, his nickname was applied to the drink – and his nickname survives for drinks to this day. Serving under Admiral Vernon was an American, Lawrence Washington.

Lawrence was so impressed by Vernon that he later named the plantation home that he built Mount Vernon and when he died it was inherited by his half brother George Washington. You can still visit Mount Vernon today south of Washington, DC., and when you do, remember it was named after a “Grog”.

For the Grogono family “Grog” has been a frequently used nickname. Today, three brothers (Alan, James, and Andrew) all call each other “Grog” which sounds more confusing than it is in practice. If Only People Could Spell

We wouldn’t exist – at least not under this name. Sometime in the mid 1880’s one Mandeville was born a Grogona – with a final “a”. However, Mandeville and his step parents appeared to have attached little importance to accurate spelling and he became Grogono (with a final “o”). He passed this now-unique family name to his child Walter Atkins Grogono, who grew up and adopted the profession of his step father, Dr. Clay, and became a doctor in East London.

Walter Atkins Grogono was the start of a long line of Grogono doctors, a tradition which continues to this day. The three generations which followed him all trained at the London Hospital in Whitechapel in East London. Today, there are many of his descendants in medicine. Walter Atkins’ third child Eric Walter Grogono, a family doctor and part time anesthesiologist, exemplfied the innovative streak which permeates the family. In the days of steam cars, he visited his patients in a Stanley Steamer. With his more demanding patients he adopted the neat trick of leaving the fuel burning to heat up the steam boiler. This allowed him an apparently relaxed visit until the safety valve blew the whistle, when he took a hasty departure.

He had success in the early days of building and racing outboard hydroplanes, and then adopted sailing as the family sport. Two of his descendants have raced sailboats in the Olympics: his son Keith in the 1936 German Olympics, and his great grandson David in the 1996 USA Olympics. He would be ecstatic that members of the next three generations are still winning sailing races in many different parts of the world. 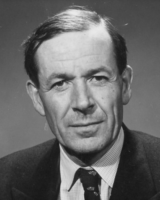 His oldest son Eric Bernard Grogono (“Grog” or “Groggy” to family and friends), again a family doctor and part-time anesthesiologist, inherited his father’s engineering and sailing passions. While serving as a ship’s doctor on a British Submarine depot ship in World War II, he managed to build a high performance sailboat and race it in Aden Harbour. He also inherited the beloved family 50′ ketch “Sonia”, which provided a sailing foundation for the growing family and for generations of medical students at the London Hospital. In addition, his love of racing smaller boats on the River Alde in Suffolk, England, infected his children and grandchildren. And, his love of handling ropes correctly and using the right knot for the right job stimulated interest in his sons. Bernard’s son, Alan (always known as “Grog”), planned a career as an engineer or a comedian but father wisely interceded on the basis that a medical career would allow both. He was right!  Grog almost followed father and grandfather into family practice but chose full time anesthesiology. Learn more about Grog.

Grog’s surgeon brother James played a major role in initiating the sport of high speed sailing. James, Grog, brother Andrew, with their father and two friends, created the hydrofoil born Tornado “Icarus”, and progressively increased the World Sailing Speed Record in “B” Class between 1977 and 1985. Today, a mean speed of 28.14 knots sounds modest. At the time, for an amateur family team, it seemed very respectable as well as very exciting.

Grog, his dentist wife Anthea, and their four young children migrated to the USA in 1974. The family medical tradition was preserved by Sally who became an obstetrician in Austin TX.  In 1995, when Grog was Chairman of the anesthesiology department at Tulane Medical School, he announced to his astonished department that they must have a website. As no one else had any idea what he meant, he created his first departmental website, followed soon after by the family website with a section devoted to tying sailing knots. Countless requests for additional sections on Fishing, Climbing, Scouting provided the stimulus; Grog’s total hip and total knee surgery provided the enforced immobility and opportunity: Animated Knots by Grog was born and rapidly became the most popular knots site on the web.

Recurring requests for a version on a disk came from scout troops, fire departments, search and rescue teams, and people with slow internet connections. To meet this demand we created Grog LLC: son David provided programming expertise; and son Martin provided his graphic design experience. Even before the disk was available we had a lengthy order list. And then, just as we had completed the disk, we started getting requests for a download version. We produced two versions, one for Macs and another for Windows, both of which are popular. The disk has been discontinued.

Development of a version for the iPhone started in 2009. The App was finally released in Late June 2010. For some days we sold only a few – partly via our own website and partly because friends and relatives felt we needed support. Then we suddenly hit success: Apple featured us as one of their favorites and for July we were the most profitable and most popular amongst iTunes’ paid Reference Apps. Even now the iPhone App still sells very well. We continue to add more knots, and improve the Apps for Android, iPad, Mac and Windows.

The original photographs were taken on the kitchen table. When the sun shone the photos were bright; when it rained they were dark. Since 2010 the animations have been re-photographed using new technology and more consistent conditions. Prompted by requests from website visitors, more animations have been added to reach a total of a hundred and ninety six animations. This new material is added regularly to the website and, although less frequently, also to our Apps. At the end of 2016, the website was updated to provide separate mobile and desktop versions.

Sections added in 2016 included Arborist Knots and Surgical Knots, the latter stimulated by our research which showed that the Constrictor Knot made the Best Surgical Ligature. And, in 2018 Sections were added for Quick Release Knots and for Horse & Farm.

The partners in Grog LLC run a number of other websites, some family, some educational, and some business:

Napkin Folding
Our sister website Animated Napkins by Grog shows how to fold napkins for all occasions.

Grogware
Cross-Platform Consulting and Software. Visit GrogWare.com for consulting information or to download your own copy of some intriguing games.

Grogono Family Website
The Grogono Family website provides some photographs as well as the sections devoted to magic squares, etc.

Magic Squares
This is a website aimed at the recreational mathematician. It focuses on the creation and structure of Magic Squares. It explains the “Magic Carpet” theory underlying regular pan-magic squares.

Stereo Art
This website demonstrates how a vivid three-dimensional stereo image is created from a repeated stereo image pair. A collection of Stereo Art Images illustrates the technique.

Index for Health Measurement
One of the earliest systems for measuring health is described on Grogono/Woodgate Index for Measuring Health. Copies are available for downloading.

His early medical education was in London, England. From the London Hospital Medical College as a student, to King’s College Hospital as a registrar, he was appointed to the Royal Free Hospital as a consultant anaesthetist. His journeys to and fro across the Atlantic made many friends in Syracuse, New York – so much so that it was an easy decision to relocate there in 1974.

He has had a lifelong interest in equipment and efficiency, holds a number of patents, and was responsible for many of the design features of the man/machine interface for the PhysioflexRclosed circuit anesthesia machine which was marketed by Dräger in Europe. From 1990 to 1997, Dr. Grogono was chairman of the Education Planning Committee of the Society for Technology in Anesthesia and organized the Society’s meetings at the Annual Meeting of the American Society of Anesthesiologists.

He is known for his interest in teaching Acid Base Balance, his annual reports in the ASA Newsletter about the trends in recruitment into anesthesiology, and for creating one of the earliest techniques for measuring health. His interests outside medicine include the creation of artistic mobiles – several of which have been displayed in the Art Show at the Annual Meeting of the ASA, and high speed sailing: during the years 1977 through 1982 he actively participated in establishing the “B Class” world sailing speed record in “Icarus”– the hydrofoil-born Tornado designed by his surgeon-brother, James Grogono.

In recent year he has increased his interest in creating websites in particular his successful websites devoted to Animated Knots, Acid-Base Balance, Magic Squares, and Stereo Art. In 2006, Animated Knots by Grog was launched as a highly successful App for the iPhone followed a year later by an App for Android phones.