I love Alice in Wonderland, especially the advice that the King gave to the White Rabbit: “Begin at the beginning,” the King said, very gravely, “and go on till you come to the end: then stop.” This website is about knots so, for me, the ideal time to start will be the end of World War II. Father and grandfather began teaching us to sail and race on the river Alde in Suffolk on England’s east coast. Near to the town of Aldeburgh this remarkable stretch of river passes within about two hundred feet of the North Sea. It then continues south for another ten miles, almost parallel to the coast, before it actually empties into the ocean. 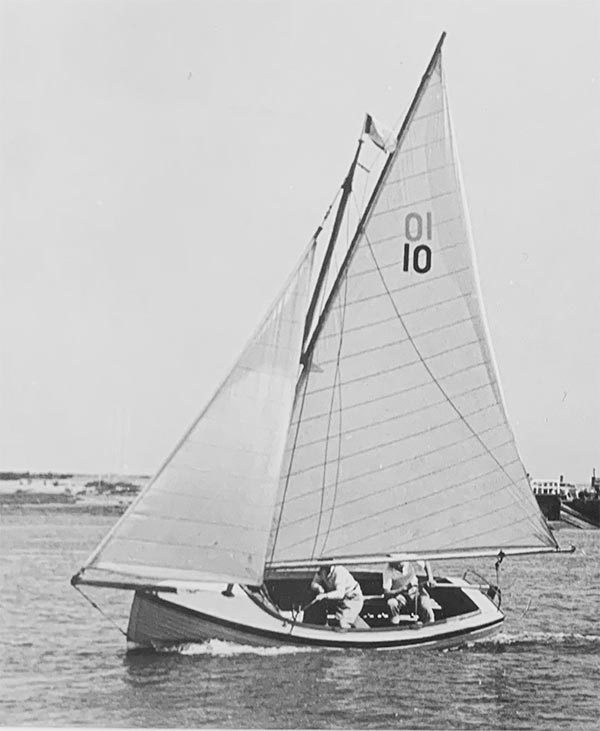 The River Alde provided wonderful and challenging conditions for sailing and racing. The tide rises and falls six to eight feet, there are awkward eddies at every bend and corner and the current is too strong to row against in a small dinghy. Initially we had no outboard motor so we often had to row up in the eddy before making a dash out to the moored boat. Turquoise was a 15’ Alde One-Design, a heavy, clinker-built (lapstrake), gaff-rigged dinghy. She was the summer classroom for younger brother James and myself. Starting at ages nine and eleven we were taught seamanship, safety, boat handling, racing, repairs, maintenance, and of course knot-tying. Turquoise had heavy lead weights under the floorboards – intended to enhance her stability. Class rules required that the weights installed at the start of the sailing season had to remain in place for that year. However, we maintained an uneasy suspicion that, in a light breeze, some of our competitors would remove their lead weights and sail “light”. However, we had “Lucky Stones” – beach stones with one or more holes in them – tied together on a piece of string. Our concern about changing weights didn’t prevent us tucking them under the floorboards near the bow – secure in the belief that now we had a better chance of winning.

It was knot-tying that particularly intrigued me. I was fascinated by rope, by whipping a rope’s ends, and by making a rope useful using a variety of knots and splices. In those days the only type of marine rope we used was tarred hemp. It had a delightful smell and was a joy to handle. Splicing the rope was easy and a well-tied knot or splice could be relied upon to hold without slipping. But tarred hemp also had a limited life, as we found out. One spring my brother and I helped father ascend the mast on a bosun’s chair on the other family sailboat, the 49’ ketch Sonia. At the top he greased the sheaves for the halyards and we lowered him back down. We noticed that he clung to the mast the whole way down. When he finally reached the deck he showed us why; two of the strands of the main halyard had parted and his weight had been held by just the one remaining strand. The introduction of Nylon rope, and later Dacron (Terylene), transformed small boat sailing. Rope was suddenly almost indestructible and Dacron rapidly became the obvious choice for both halyards and sheets. 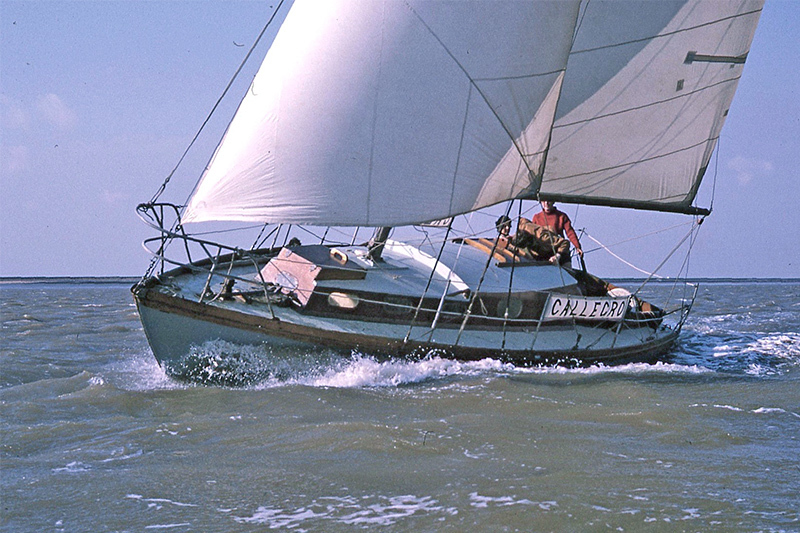 In 1962 father took delivery of his new sailboat Callegro. Anthea and I were allowed to honeymoon on her even before he had really sailed her himself. None of the halyards or sheets had been properly whipped. Suffering relentless rainfall I refinished the end of every line on the boat with a Sailmaker’s whipping. Finally the rain and my behavior provoked rebellion and Anthea insisted we escape from the boat for a night in a hotel. However, the pleasure of working with rope lasted a lifetime; on every one of our boats the end of each line received either an elegant eye-splice or a Sailmaker’s whipping. 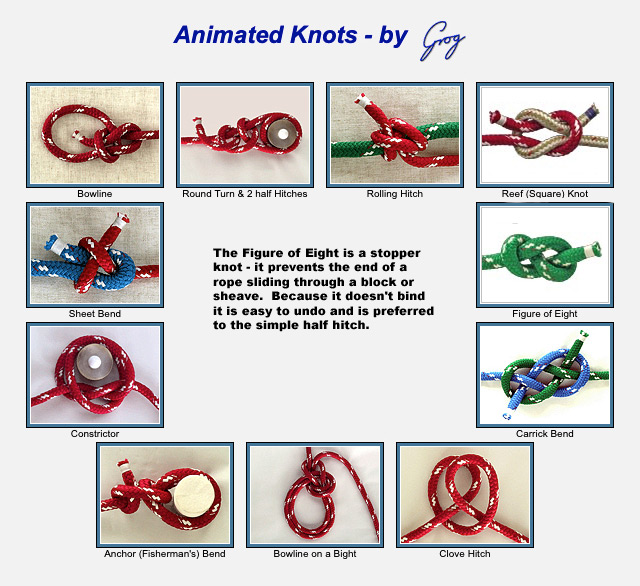 The introduction of the Internet provided an amazing opportunity to share some of this enthusiasm and by August 10th 2002 the family website displayed eleven animations on how to tie knots. Initially the knots section was confined to Boating and I boasted that this was purely an educational endeavor and would never be commercialized or monetized. That was before the website became the most popular for knot-tying.

Repeated requests by fishermen and climbers led to the addition of these two sections and also to some of the most unpleasant e-mails I have ever seen, e.g., “You don’t know what you’re talking about!” but very graphically and vigorously expressed. I wrote back and agreed – and explained it was because I had never climbed or fished. I requested help and the very same critics became much-valued helpers and advisors. I still haven’t climbed or fished but the fishing section is now the most popular part of our website.

In July 2005 we outgrew the server we were using. We transferred to a new service and also acquired our current domain name. Of course, the new name meant that all of our carefully built-up traffic vanished. Patience and time helped us gradually restore our ranking and many changes took place during the next 14 years. However, the most significant occurred in early 2019. I finally gave in to son Martin and the website became a WordPress site. The team took on Kevin Embree and, with his broad experience in product management, analytics and marketing (eBay & HomeAway), he and Martin worked on the new appearance. Son David used his computing skills to install our critical material into the new site and my task was to re-program the animation player to provide improved features. The result was a completely new appearance and structure with improved advertising and search facilities; there were twelve categories, ten types, a “Knot of the Day”, and 197 pages showing different knot animations.